Since the introduction of Flexi-N, ‘leaf scorch’ has slowly become an accepted part of the liquids phenomen with full crop recovery and no yield loss. In recent years however with the advent of new Ag Chemicals, the question has been asked if the same crop recovery principles still apply.

Recent scorch trials conducted at York and Lake Grace have shown higher levels of damage under NDVI assessment and leaf test compared to the control treatment but in all cases recovered well to achieve higher yields at harvest.

Unfortunately the planned Bunjil site was removed from the project due to the poor season.. We are hoping to redo this trial in the North to assess the impact on crops of some commonly used Ag Chemicals mixed with Flexi-N.

See below for final yield results, note that each treatment was replicated three times for scientific analysis.

Kalyx recorded the highest percentage of leaf damage on Treatments 4, 6, 8 & 9, measured at 7DAT.
Crop had 2-3 nodes when sprayed.

• 0.3 - 0.5 t/ha response to 100 L/ha Flexi-N
• No ill effects on yield from applying Precept, Velocity or Esteron LV with Flexi-N
• Higher yield with Streamers (did not find this Lake Grace) 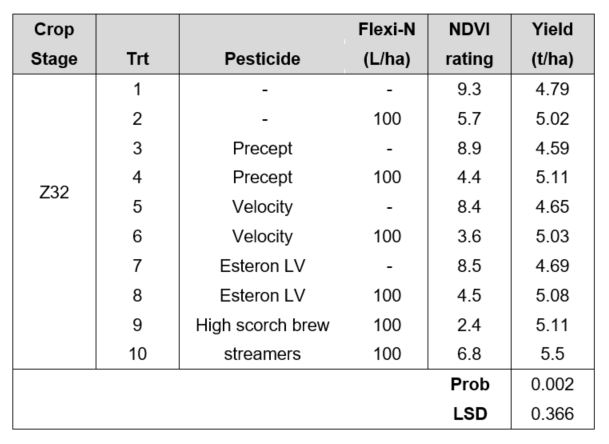 Kalyx recorded the highest percentage of leaf damage on Treatment 15, with up to 85% scorch evident on some leaves, measured at 10DAT.

Kalyx recorded the highest percentage of leaf damage on Treatments 4, 6, 8 & 9, measured at 8DAT. 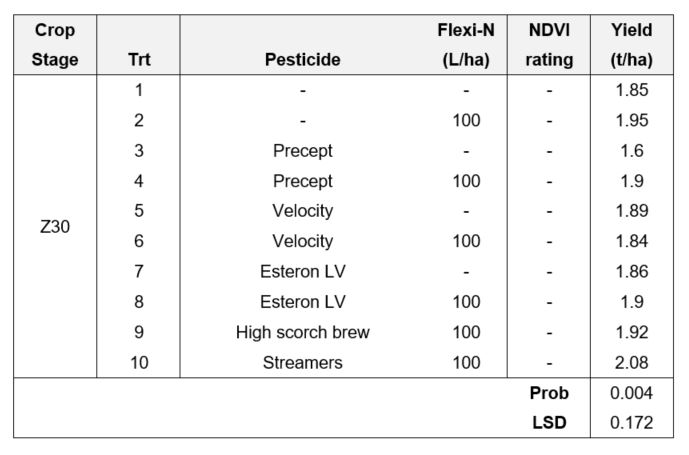 Kalyx recorded the highest percentage of leaf damage on Treatment 15 with up to 80% scorch evident on some leaves, measured at 9DAT. 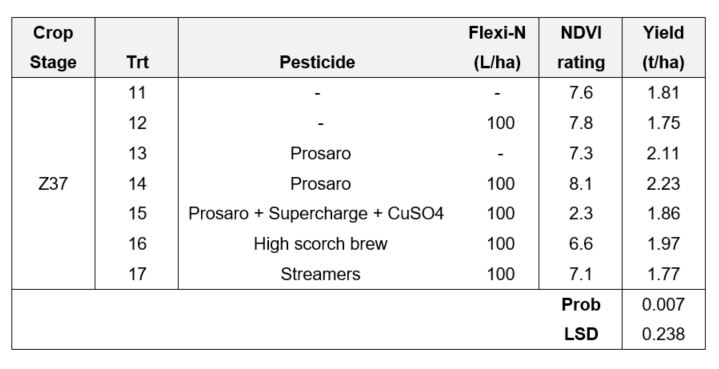 Overall, yield results from the project did not present any findings that were unexpected and should provide users with the confidence to apply treatments concurrently without needing that extra pass. General scorch precautions still apply including temperature, wind, Delta-t and plant stage.
This project would not have been possible without the assistance from Elevo in conducting the NDVI drone flyovers with orthomosaic ratings and Kalyx for providing a Research Agronomist to conduct routine site assessments on the up-close leaf damage – so a big thank you to both of those teams.
For more information on this project or interested in learning more about how to prevent scorch when mixing chemicals - please speak to your local CSBP Area Manager.
We would also like to thank the growers involved Steve and Anne Chipper at York, and Arthur Slarke in Lake Grace. Their involvement with this project is much appreciated, as without access to their crops, this project would just not be possible.