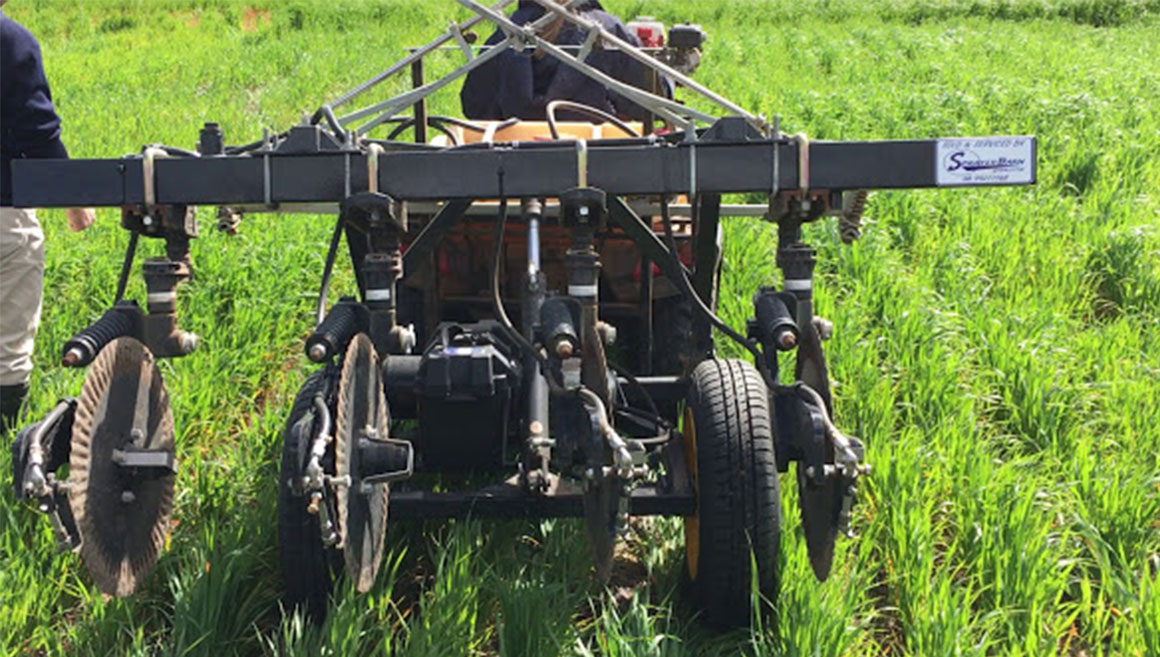 Can we increase nitrogen use efficiency by banding N in season?

The introduction of Flexi-N by CSBP to the Western Australian market in the early 2000’s enabled growers to have more control over their nitrogen (N) applications in season. The less toxic nature of Flexi-N also allowed CSBP to investigate and then promote the benefits of banded N at seeding time. CSBP trials have proven that banding N at seeding time can result in up to 20% better efficiency of N use when compared to comparative rates of N applied to the soil surface at seeding time.This increased efficiency can be attributed to the following factors:

- No exposure of N fertiliser to the air resulting in less ammonia losses to the atmosphere (volatilisation).
- Less N in contact with organic matter resulting in less tie up (immobilisation).
- Fertiliser N concentrated in a continuous band underneath the emerging seed which allows easier root access to applied N as well as encouraging greater root proliferation and growth around the N fertiliser.

Until recently this increased efficiency could only be achieved by banding the N at seeding time and then following up N applications in-season via conventional methods such as spreader or boomspray. The introduction of streamer nozzles allowed growers to fine tune N applications but the increases in N use efficiency were not as pronounced as those results achieved by banding Flexi-N at seeding time. However recent research conducted by Agriculture Victoria in conjunction with GRDC has introduced the possibility of being able to achieve these efficiency gains in season by using a method of N application called mid row banding. These trials have shown that using mid-row banding in season has resulted in higher yields when compared against current application methods. These trials also showed that the recovery of fertiliser N in the plant and grain was up to 35% higher when using mid row banding as the application method, thus reducing the reliance and reduction of the organic N pool in the soil.

Mid-row banding is a method of application that has been used with success in North America for a number of years. It works by using a specialised machine fitted with single or paired coulter discs fitted with a specialised liquid delivery system.  The discs cut a narrow slot in the soil and the N is applied into this slot under pressure before the slot closes up. This allows the N to be placed precisely underneath the soil surface in every second row of the crop in season. 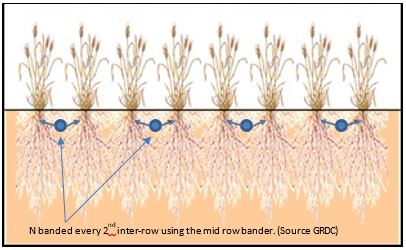 CSBP in conjunction with Sprayer Barn and Fast Ag have built a small trial version of a mid row bander for use in CSBP’s Field Research program. This machine has been utilised in a number of trials across the state in this years program with the aim of comparing the N use efficiency of this method of application with other methods such as banding at seeding and the use of streamer nozzles in season. CSBP will continue with this research in a variety of different locations and seasons to determine if this innovative technology has a fit in Western Australia’s farming system. CSBP is also involved in larger paddock scale trials using a 12 metre mid row bander as a part of the CRC Food Agility Project.