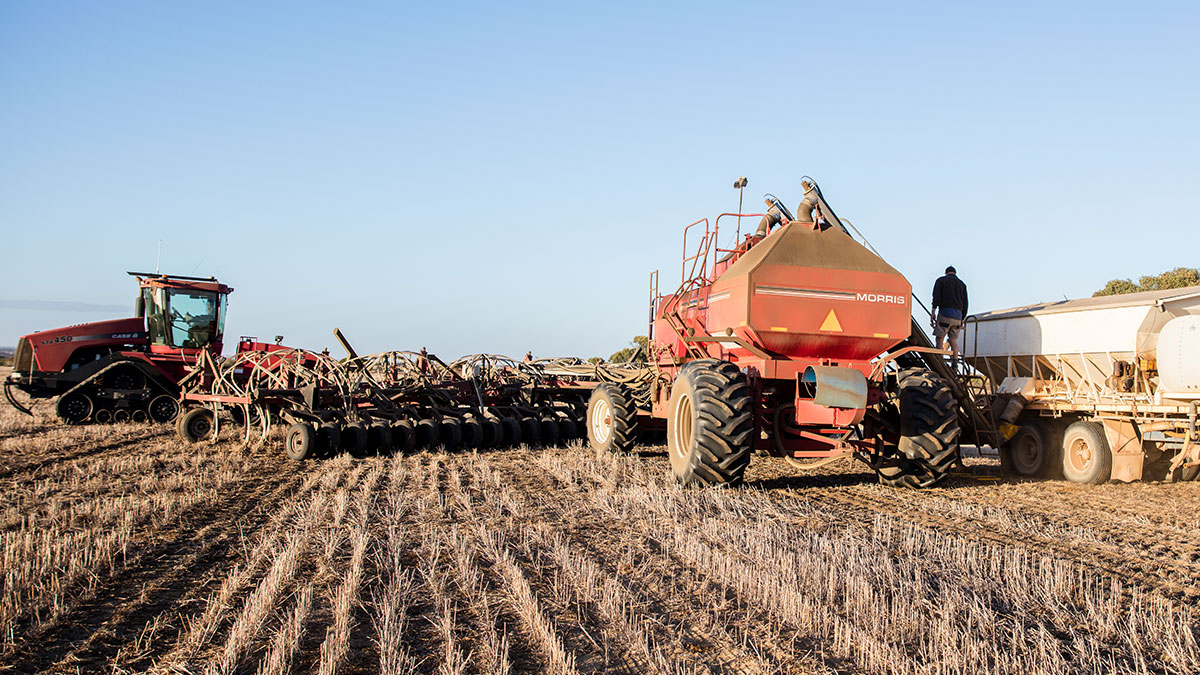 Fertiliser toxicity on emerging crops can be caused by two different factors individually or as a combination. These two factors are:

The majority of all fertiliser products used in WA are salts containing different concentrations of the required nutrients. As with all salts the nature of a fertiliser granule is to attract moisture. This moisture helps to break down the fertiliser granule and release the nutrients into the soil, making them available to the emerging seedlings. The damaging effect from salt is most likely where crops have been sown into a drying soil profile (which is more likely on lighter soil types) – and there haven’t been follow up rains to dilute the fertiliser salt. In this situation the salt drags moisture away from the seedling and can cause dehydration, burning and in severe cases plant death. This effect results in reduced plant numbers and potentially reduced yields later in the season.

There are many factors that interact in a complex way to affect the occurrence of fertiliser toxicity caused by salt effect, these include:

Soil type - In general toxicity can be less on clay soils that are able to adsorb ammonium, phosphate and potassium, thereby reducing their concentration in the soil solution. Clay soils also dry out less quickly than sandier textured soils.

Soil moisture - Seedling damage is more common when crops are planted into marginal soil moisture with little or no rain in the weeks after sowing. In this case the fertilisers dissolve and the nutrients in solution become concentrated as the soil dries.

Crop type - Small-seeded crops like canola are more sensitive than cereal crops. Lupins are also very sensitive to the salting effect and care must be taken to ensure adequate separation. CSBP trials have proven that separating all fertiliser from canola seed at seeding time reduces the effects of fertiliser toxicity compared to placing fertiliser with the seed which has resulted in reduced plant numbers. However plant numbers would have to be severely reduced to warrant re-seeding the paddock.

Trials have also proven that lupin yields can be reduced due to plant establishment issues resulting from fertiliser being placed in close proximity to the emerging lupin plants. This is caused by the desiccation of the germinating radicle by the salting effect, because there are no other roots to compensate the seedling dies.

A combination of two or more fertilisers will change the salt index and potentially increase the risk of toxicity. Fertilisers containing both K and N in the same granule or as a blend should be used with caution when placing close to the seed in drying conditions.

Fertiliser placement – The risk of toxicity can be reduced by separating the fertiliser from the seed. Tines that produce a wide vertical and horizontal scatter of granules are less likely to cause toxicity than narrow points that produce a tight band.

It is hard to define so called ‘safe rates’ of drilled fertiliser because dissolved salt concentrations depend so much upon soil moisture conditions at seeding and rainfall afterwards.

The only sure way to eliminate fertiliser toxicity risk is to band fertiliser away from the seed – ideally 3 to 5cm away.

If seed fertiliser separation is not possible, fertiliser toxicity effects can be reduced by:

- topdressing some of the fertiliser

When high rates of urea are banded, this produces ammonia gas that can move towards the soil surface in a flame-like shape. So seed placed directly above or adjacent to the urea fertiliser can be damaged, even though they may be separated by 2-4cm. Sandier soils in marginal moisture conditions have a higher likelihood of been affected.

Urea toxicity can be identified by seedling death before emergence above ground and also by “silly seed”. Silly seed is where the seed has germinated but the young seedling doesn’t grow upwards to the soil surface but rather grows sideways through the seedbed and eventually dying. See Fig 2. 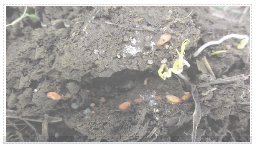 The effects of ammonia toxicity can be reduced by banding fertilisers containing urea far enough away from the seed to reduce the risk. Flexi-N also only contains 25% of its total N concentration in Urea form and is proven to be a much safer alternative for banding N than Urea.