2018 was the sixth and final year of our long term lime x potassium trial that was located in Cascades, WA.

This season's harvest results saw a 1 t/ha response in wheat to applied potassium. Crop requirements were met by using 100 kg/ha of K-till Extra Plus supplying 13 units of Potassium (K).

Treatments 6 and 7 showed that by removing the potassium application yield penalties were seen after one rotation. 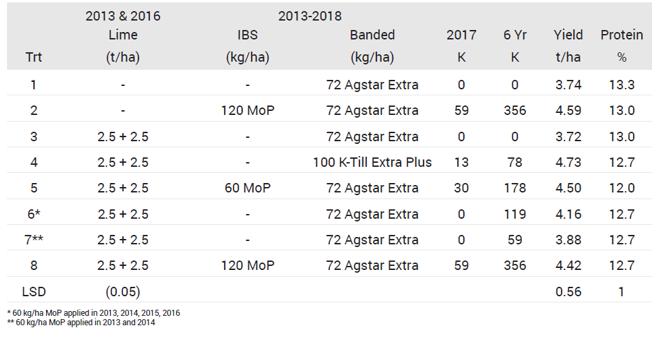 After the completion of the trial, cores were taken down to a depth of 50 cm on all plots to see what changes to the soil profile we could see.

2.5 t of lime applied in 2013 and 2016 have had a significant effect on soil pH down to 20 cm. This indicates that deeper cultivation/mixing may be required to move lime deeper into the soil profile. Since 2013 we have only seen one increase of yield due to the pH change in Barley in 2016 (0.8 t/ha).

Higher rates of K than that supplied by 100 kg/ha of K-Till Extra Plus were required to satisfy crop demand in barley in 2013 and 2016. Higher K rates are also required to replace K removal in grain (assuming 5 kg/t in wheat and barley and 10 kg/t in canola). We saw in the soil K profile that the 0-10 cm levels on all plots increased in number but depth sampling showed that sub soil numbers had dropped where no or low K inputs had been used.

This stratification of potassium in the soil profile is a common occurrence throughout the state especially where farms have been in a long term minimal tillage rotation and this trial highlights the benefits of soil sampling to depth to understand where your levels are and truly understand what responses you may see from applied fertiliser. 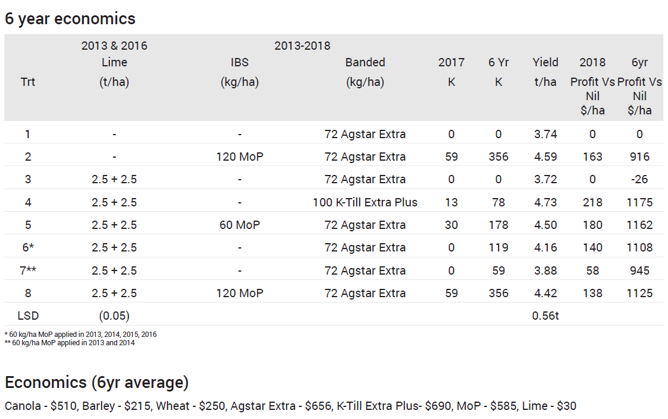 After six years the economics of this trial showed that K-Till Extra Plus performed as well as either 60 kg/ha or 120 kg/ha of MoP top-dressed every season. Applying potassium gave us an instant return on our investment and was the key profit driver and the additional profit from applying potassium was more than enough to offset the cost of applying lime