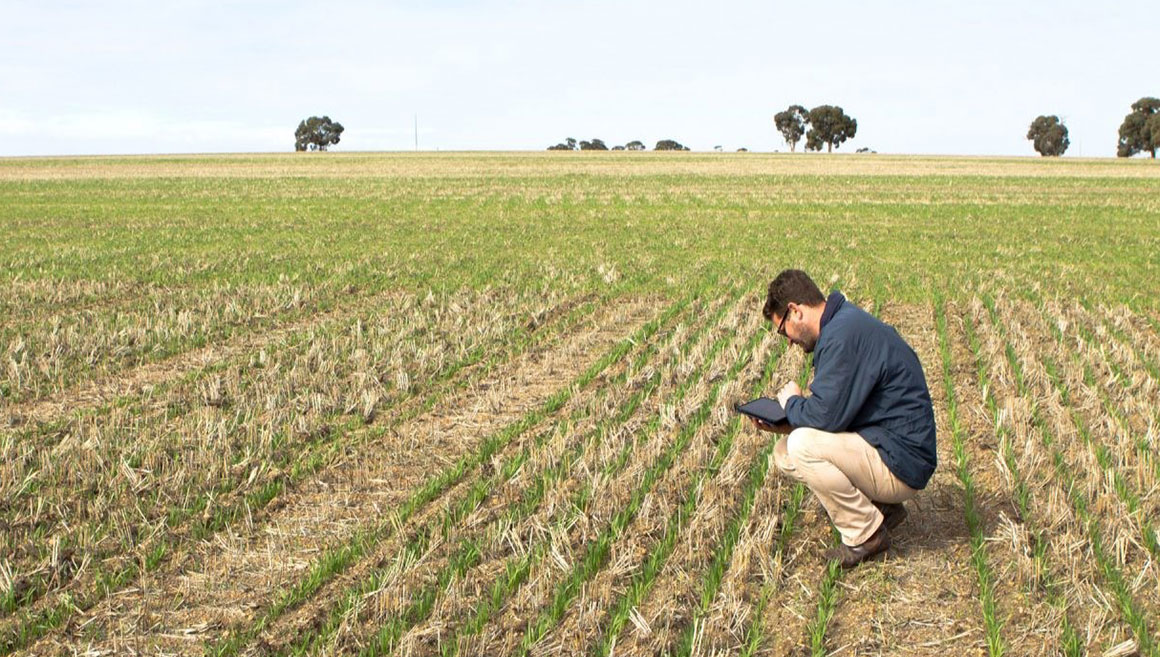 2019 is the farming year that we would all like to forget. Fantastic rains in June showed great promise for the year ahead.

However no follow-up rain to finish the crops off, and a transition from winter to summer in September meant that harvest results were well below average in the Midlands and Northern Ag region.

So what does this mean for our fertiliser inputs for 2020? Because we had lower yields and “removed” less nutrients than what we applied, then surely the remainder will be sitting there ready and waiting for this year’s crop? Does this mean that we can reduce this year’s inputs to save money and utilise what we didn’t use last year?

Unfortunately the biological process of the soil and nutrient fixation and release is a little more complicated than a simple addition and subtraction function.

Take for example Phosphorus (P). If we only yielded 2t/ha of wheat last year then the rules of removal dictate that we only removed 6kg/ha of P. Because we had a tough year last year and we applied enough for 3t/ha, say 9kg/ha then there should be 3kg/ha of P left in the soil. By following the removal rationale if we are aiming for a 3t/ha yield this year then we only need to apply the 6kg/ha that we removed last year to make up the deficit. Sadly the P cycle is a little more complicated than this.

In any given year depending on soil P levels and PBI we may only ever have access to 30% of the applied P. The rest of the plants requirements will need to come from the P in the soil, largely from the P bank which even though yes, last year’s P may have contributed slightly, is more dependent on the last 10 - 20 years of P applications than last years in isolation.

10 recent P trials that CSBP has conducted around the state have proven that P requirements are largely driven by two factors:

Without knowing what were are dealing with in the whole soil profile then we are potentially flying blind and limiting our crops yield potential, particularly with P. 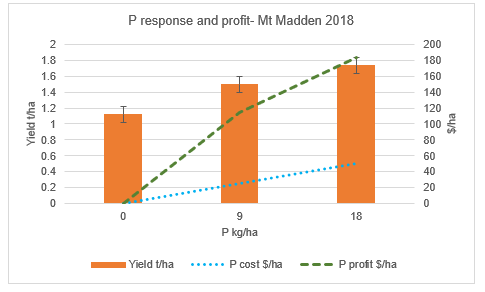 The paddock where this trial was held averaged 1.6 t/ha in 2018. if we had taken the removal approach then technically this paddock should have only needed 5 kg/ha of P. However 5 kg/ha of P potentially would have returned no yield benefit and we may have lost money on the P.

By using only the soil results in the topsoil we had a recommendation of 0 kg/ha P. In this situation we make the assumption that the paddock is not going to be overly responsive to P and only removal or maintenance rates of P are required to keep soil P levels stable.

By using the complete soil profile results we had a recommendation of 15kg/ha of P which was a lot closer to the rate of 18kg/ha which returned us the highest yield and the highest profit from P.

In short the P response was driven by the P and PBI levels of the whole soil profile. The P applications from 2018 played a minor part in terms of contributing to the overall P status of the soil but their contribution was not in the order of multiple kg/ha of P.

Whilst it may be tempting to cut P rates this year to try and trim costs following last year we have to remember that we can’t punish this year’s crop and reduce yield potential for last year’s weather driven mistakes. By soil testing to depth and using a reasonable long term yield target we will be able to try and maximise yields and returns. This will have more of a positive impact on your bottom line than saving a few dollars per hectare at this end of the season and more than likely reducing yield potential and returns at the end of the season.

Nitrogen (N) is a little bit simpler than P but there are still a numbers of factors at play. CSBP trials from 2019 found that the maximum benefit from applied N was from banded at seeding applications. Any N applications after Z30 or after the last decent rainfall in the season contributed very little in terms of yield and protein as there simply wasn’t enough rainfall for the crop to utilise the N (Fig 2).

Theoretically this unutilised N should still be available to this year’s crop, however when it will become available is the question.

The availability of this residual N will be determined by the following factors:

In order to determine the value of any residual N the only option is to soil test to 30cm to determine exactly what your soils current and potential N supply is going to be. Nitrate and Ammonium N levels will give you an indication of the current N status of the soil whilst your Organic Carbon levels will give an indication of potential N that will be mineralised over the year.

As can be seen from Figure 2, banding N and banding a robust rate of N is still the best way to maximise Nitrogen Use Efficiency (NUE). By banding a high rate of N at seeding time you allow the crop to set up a decent yield potential and allow yourself more time to make any N decisions in season. In years like 2019 banding high rates of N allowed us to shut the gate and gain the biggest benefit from the N applied at seeding time.

Potassium (K) is a very residual nutrient. Any unutilised potassium from 2019 will be able to be accessed by this year’s crop. However as with P and N the K requirements of this year’s crop will be determined by the crop yield potential.  Supply of K needs to be determined by soil sampling to 30cm. A long term K trial near Mingenew showed that the best yields in 2019 were on those plots that had received a capital application of K in prior years as well as a maintenance application of K each year supplied by an NPK compound at seeding time.

If you have already embarked on a capital K program please also consider that the best efficiency you will get will be from banded K in conjunction with any extra K applied by topdressing.  Despite a high possibility of leaching in 2019 there was still a strong response to residual K from previous capital application with 210-220 mm of rain from early June to early July indicating that leaching losses (if any) were not significant.

Before taking the red pen to fertiliser expenditure this season please ensure that you consider the following:

Without soil testing and considering what we actually have available to this year’s crops we are flying blind and potentially reducing our capacity to maximise returns.

For access to all trials mentioned in this article as well as trial results from the last three years please visit csbpresults.com.au